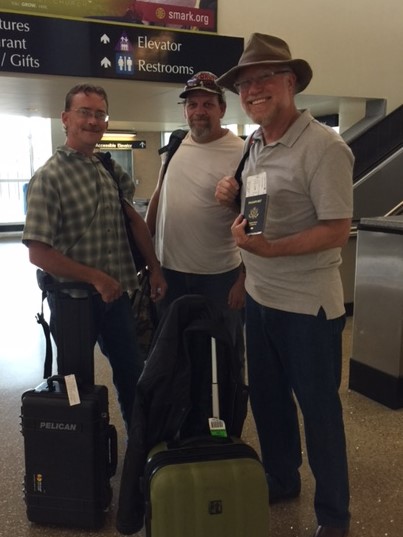 Tim and his best friend, Doc, have been working for Crystal Springs Mining Company for over twenty years. As a result, they are experts in the cleaning and prep work required to display mineral specimens. They set up and attend mineral shows for Crystal Springs all over the country.

Tim and Doc have traveled extensively in the US, however, neither has ever traveled overseas or worked underground in an active mine. In fact, Tim has not even been on a plane in over twenty years!

This all changed in July of this year when they traveled to Peru to help Thomas Nagin and Bryan Lees at their new Rhodochrosite mine in Pasto Bueno.

It would be a true adventure for both of them as the mine lies at 15,000 ft. in a very remote area in the center of the Andes Mountains. They must traverse some of the world most dangerous roads. Once there, they would be guests at a camp just recently built and designed to accommodate a crew of twenty. This crew lives there while they work in the mine. The weather is brutal and the oxygen levels are only 50% of what they are at sea level. Altitude sickness for the uninitiated is a serious concern. To add to this, neither Tim nor Doc spoke any foreign languages: only Spanish, Quechuan, and Aymara are spoken.

Thomas has spent forty years traveling throughout South America searching for a variety of minerals. He has been to the Pasto Bueno Mine numerous times; this included a trip to film an episode of Mineral Explorers Season 2.

Bryan, an engineer and geologist, has traveled the world and is also a well-known and respected mineral dealer. He has owned and mined the world-famous Sweet Home Rhodochrosite Mine in Colorado.

Thomas and Bryan needed a couple of trustworthy guys who were familiar with handling fine mineral specimens. The choice became obvious: Tim & Doc were uniquely qualified for this work.